On 1st June I bought a 2016 Kia Cee’d GT-Line in gleaming white. It was barely a year old and had only done 6,000 miles so it wasn’t surprising that it was totally flawless inside and out. What was remarkable, though, was when I looked at a 2009 Ford Focus for sale next to it and saw that it, too, was flawless, with not even a single visible hair-line scratch. Having spent hours cleaning and polishing my own seven-year old Focus to trade in, I was convinced it looked as good as it could do – until I saw Darren at work on an even higher mileage vehicle and understood the true meaning of the description in all of Steve’s adverts – TOTALLY IMMACULATE. I have no doubt that the same care goes into the mechanicals, so no-one is going to be disappointed buying from this great little team. 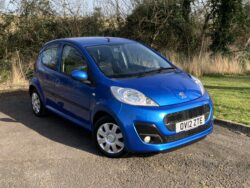 Reasons to buy with confidence

All our cars come with: